As part of a training scheduled in the next few weeks I’ve been trying to figure out a summary outline about consumer credit scoring models. Based on a sample data set (with 10,000 records, found in ISLR and courtesy of a California bank) the following scatter plot shows, in a training subset of 6,000 thousand credit records, the relationship between balance, income (“Saldo” and “Reddito” respectively in the plot) and working status (student/non student, “Yes” or “No” in the plot) whereas the color identifies the default status (“Yes”, “No” in the chart). 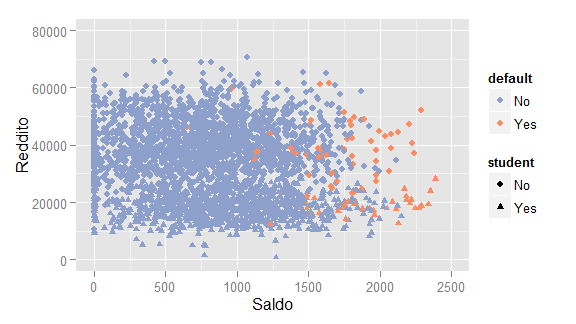 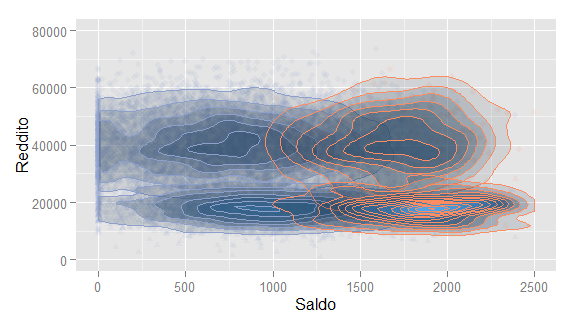 By twisting and turning data analysts are able to discern useful patterns to anticipate expected responses in, say, a credit policy change, for example. The density plot above shows that there are two interesting areas according to the three predictors: income doesn’t seem to affect solvency, contrary to common wisdom, whereas default rates (in orange color) are almost exclusively found in the balance area higher than 1,000 dollars. Furthermore, a higher rate of delinquencies is found the student income status, which is a lower income area too.

One of the major findings in these research examples is that it’s often (not always though) possible to find prediction models able to correctly forecast default probabilities with reasonable degrees of accuracy. The table below shows actual vs. prediction client solvency classification of a “Yes/No” default status according to an out-of-sample (the remaining 4,000) data set based on a (logistic) statistical model.

Though we can’t be 100% to predict default ratios in a year time, credit bureau agencies (CRIF, in the Italian case) can and do a very good job in assigning rating categories especially considering that behavioral biases are minimized given the context: machine learning is as objective as can be. Though human bias remains at model selection level, as always.