Though market participants know it is with a twist of fate that stock markets like to play tricks on their hindsight optimized risk models, it is hard to put aside VaR, a standard max loss estimate on stock markets. Based on daily historical returns since February 25, 2013 and using a standard approach in risk management [1], I set off to remind myself how meaningfully Nassim Taleb, an epistemologist, has affected global investors’ perception about risk. 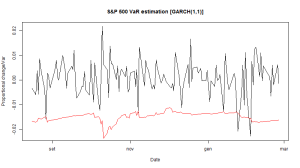 Misguiding may be the expectation that within 20 trading days the expected max daily loss (see table below column named VaR) will be 1.67%. The chart above shows a backtest on S&P 500 returns applying the daily VaR risk estimates (the red line) since September 2013: though risk managers update their VaR estimates on a daily basis it’s hard for street smart investors to not be caught in a maelstrom once they’ve been informed that their asset manager employs state-of-the-art risk management procedures.

Apart from actual frequencies of extreme swings on markets overreaching well beyond ex-ante risk estimates, street investors – as well as Wall Street fellows – utilize their well biased cognitive tools to frame the circumstances under which they invest their fortunes: herding imitation, optimism, overconfidence and many other behavioral mechanisms are at play whenever we envision future investment results.

The Black Swan by Mr Taleb has shaped public wisdom about financial markets’ extreme reactions to the point that risk managers admittedly acknowledged to over optimistically rely to their risk models until the fifth decimal place after the point. The Queen of England, with a remark able to blow the City first and then knock down Wall Street after crossing the Atlantic, commented a briefing about the financial crisis with a ‘if it was so large, why did nobody see it coming’? We economists must still learn a lot about how things actually go.