Stock market volatility seems to have increased substantially since the beginning of the year. With this in mind I wanted to draw my attention on specific metrics to gauge the actual extent of what’s been going on since then. The chart below shows FTSE MIB stock index 20-day rolling volatility, together with other major stock indices, it’s clear the market has been factoring in increasing risk since last fall, though Italy’s remarkable spike in volatility contrasts other markets starting from the beginning of the year. 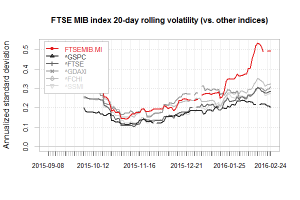 The Italian stock index has been underperforming all other stock market peers (see plot on top and at the bottom – respectively cumulative return and drawdown – in the chart below). Currently, the FTSE MIB is up a few percentage points from the trough it reached on February 11, when it was down almost 31% since the bear market it entered into on October 26, 2015. So far it’s been an 84-day bear market hitting the low 75 weeks after it started. 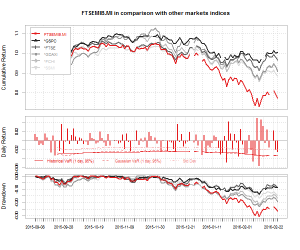 All other major stock indices seem to be better off. The S&P 500 index hit the low on February 11, too, though with a milder peak-to-trough loss of 13.3%, while the other European indices have been lagging behind only modestly (with the notable exception of the FTSE 100 index of the LSE that has paralleled the American index).

Over and under-shooting behavior has been characterizing stock markets since the beginning of the year; this is particularly evident for the Italian market (see central plot in the figure above). Though one can’t put it down with certainty to any specific factor, evidence seems to suggest the abnormal weight of the banking sector in the FTSE MIB index might account for this overall underperformance.

After all Italian banks were targeted by speculators during the renewal of the non-performing loan saga both the European Commission and the Italian Government dealt with until they laid down a plan to securitize these exposures without relying on an outright guarantee provided by the Italian Treasury.

As a closing remark, some market observers and participants have pointed to the possible undervaluation of many a bank in Italy, at least considering stock prices. This will probably spur a new wave of M&A’s down on Piazza Affari?