Investment managers like to boast they can “beat” the market they invest on before adding the term “beat” has to be considered on a risk-adjusted basis. But research has proven that “to beat” the market one needs an unusual amount of luck. Relying on time series returns on several hundreds of European and American equity funds the following charts show the ones which actually have beaten (on a non-adjusted basis) during the last three years (from June 2010 to June 2013). 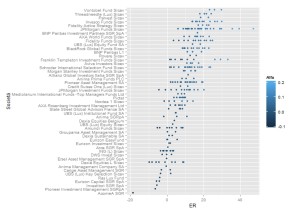 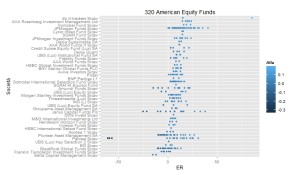 Excess return, a conventional gauge of how much a fund return beats its benchmark market return, is to a good extent explained by the fund manager’s alpha, another conventional measure of how well a fund manager diversifies its portfolio and how good he or she is in stock picking. Thus, fund managers with top excess return grades have enhanced their market-dependent performance by researching the companies they invested on (as measured by alpha). One question remains unanswered: can we rule out coincidence and rely on a systematic stock picking positive contribution for the following three years?