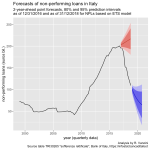 Non-performing loans (NPLs) have been plagueing Italy’s economy since the financial crisis broke out in 2007 and economic headwinds have since then been pushing back Italian banks’ capability of shedding them at least until late 2016. Economists know that high levels of non-performing loans in banks’ balance sheets hinder the economy by rationing credit to firms, especially smaller ones. Strategies to tackle the issues were strongly needed. The reproducible code used to develop this analysis can be found here.

According to the Bank of Italy NPL levels1 have almost halved since they peaked in 2016, since regulators (namely the ECB), watchdogs, international institutions (the IMF and the OECD), EU’s parliament and the Italian government started addressing this issue by demanding coordinated plans to reduce NPL levels. Back in late 2016 forecasts projected NPL levels to 225 billions euros over the following two years. After a wave of securitization transactions in 2017 and 2018, NPL forecasts are pointing now to one third of that amount to be reached by the beginning of 2021. 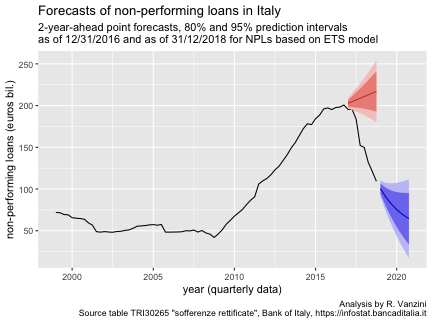 Forecasts point to 65 billion euros by the fourth quarter of 2020, though there’s variability that can be factored in by using a prediction interval ranging from a low of 34 to a high of 95 billion euros. Considering an enhanced downside risk regarding the global and the Italian economy, forecasts can range from a low of 17 billion to a high of 112 billions, in this case without taking into account the proposed securitization plans to further lower NPL levels by the end of this year.