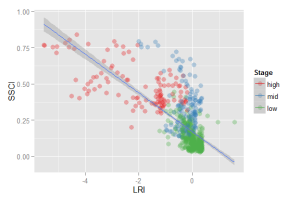 As risk is identied with volatility LRI has been designed to be a measure of risk, thus LRI’s variability could be used as a further indicator on liquidity risk measuring money market risk-on/risk-off attitude towards liquidity risk itself. LRI’s volatility changepoints (shown below) mark three stages (low, mid and high) in six phases from January, 4th 1999 to August, 30th 2013 and curiously, though not unexpectedly, July, 30th 2012 is the last one and coincides with Mr Draghi’s well acclaimed ‘whatever it takes’ speech marking LRI’s meaningful retrenching to its lowest and most stable levels (variance has been 0.02 ever since and with a rising level of LRI
signalling diminishing liquidity risk). 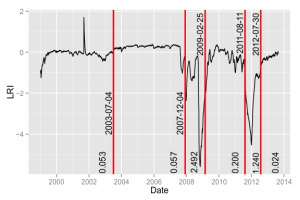