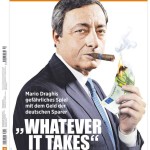 Consensus is gaining momentum. Or at least that is what one hopes for; in the beleaguered Euro area several attempts to have a single policy against deflation and a likely stagnation have failed miserably due to lack of political will. As the Economist points out in this article, Germany is becoming part of the problem; if not the problem itself. Moral hazard and hyperinflation (!) are worrisome economic issues an economist, and a policy maker, must not forget but it seems there’s a more urgent and concrete condition households and firms have been facing since the post-crisis in Europe and elsewhere. Governments – Germany most of all – can now use their funding strategies to lever unparalleled borrowing costs with maturities up to 30 years. Paul Krugman has been repeating since 2008 we need to focus on what we can do to get out of this crisis now as opposed to what we should do to prevent the next one. As helicopter money resurfaces in the monetary policy debates all over the world, the Economist makes the point it might be a “technical solution to a political problem”: if it’s lack of will, it won’t work either way.