During some training sessions, held between October 1 and October 16, 52 financial advisors were asked to rank their preferences on 9 listed stocks (Google, Apple, Exxon Mobil, Citigroup, Goldman-Sachs, Wal-Mart, Ford Motors, Toyota and Baidu) according to two criteria: expected risk and required return. Consistently with other researches we have found that many individuals – and in this case we’re considering financial advisors – tend to invert the expected risk-return relationship, contrary to financial wisdom. 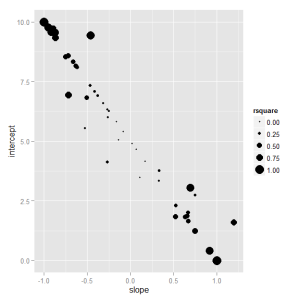 The figure above shows the estimated slopes and intercepts representing the interviewed sample’s reported risk-return rankings. Financial advisors (at least some of them) are no different from their clients when it comes to demand return for risk. At least on an inverted scale, though.