Posted on 5 February 2014 by Rodolfo Vanzini — No Comments ↓

Recovery is on the way. Maybe we should say it’s on the road, again. Never before I had dealt with 121,189 rows times 93 columns for the mind boggling figure of 11,270,577 numbers. Browsing the catalogue on the European Union Open Data Portal I stumbled – actually this happened not so randomly  - on quarterly cross-trade road freight transport statistics (see and get data here).

The chart below – with the latest data available - shows how cross-trade transport changed year-on-year between Q4 in 2012 and the same quarter in the preceding year. On y-axis are transport statistics in two different measure units (thousands of tonnes and millions of tonnes per kilometer), on x-axis the same the year before and the red line is the diagonal cutting in two halves all the values in the chart. The blue line above the red diagonal is a smoothing statistics showing that on average freight transport on asphalt improved year on year in Q4-2012. While notable exceptions are easily recognizable (the Czech Republic, CZ, for example) the underlying and general pattern shows an improvement in freight road transport. 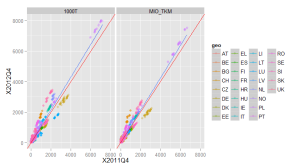 The different colors represent all countries surveyed by Eurostat – see their codes in the guides on the right – and, though one can hardly tell the difference in their shades, it’s easy to see that countries have significantly different road trade transport patterns. In the chart below country plots have been “trellised” to highlight these differences (see Poland, PL, for example). 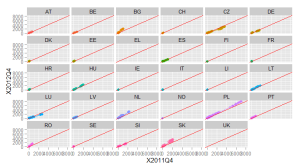 On average, overall freight transport increased by 8% year-on-year through Q4 in 2012 in the European Union, though differing country patterns can hide counter trends in the data one can rule out coincidence comparing Q4-2011 and Q4-2012 statistics [§]. It’s interesting to have a look at the cross-trade road cargo patterns measured by carried tonnes in 1000T, ‘hire and own’ carriages in the heat map below: the largest EU countries tend to dominate (top right in the heat map) road cross-trade transportation. 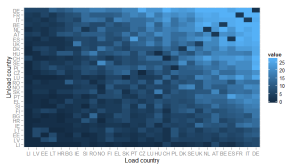 Truck drivers may be happy to read the news, not so much environmentalists perhaps. Another question remains unanswered: how is freight road transport correlated with financial markets? Asset managers will surely keep their eyes on the road.