Securities markets efficiency: not so inefficient 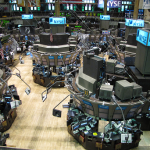 Financial economics has professed securities markets efficiency since long when markets could actually offer arbitrage opportunities to the rich and the poor. It was probably enough to grab a copy of your favorite financial newspaper like The Wall Street Journal and by going through the headlines you could come across some unexploited piece of news that current market prices did not fully reflect. As we tend to favor the predictable versus the unpredictable, random fluctuations typical of a volatile market do not just represent unpredictable swings but they must have easy to interpret explanations which we like to assess with hindsight. Of course, past events in hindsight are perfectly predictable even in the light of scarce information.

The weak, the semi-strong and the strong might as well be another title of a Hollywood old-fashioned western movie if not they’ve been already used to identify different forms of market efficiency. One common avenue to assess if past and current public relevant information (the semi-strong character in the movie) is fully reflected in current prices is to test for autocorrelations across different lags in time series of traded stock prices. As part of your favorite economics correspondent’s daily practice – alas not with his violin, not anymore at least – and with the aim of producing a fully fledged piece of research to be published in a respected financial economics journal, we (the authors of the newly coming paper) tested for evidence of meaningful autocorrelations in the time series of 418 securities comprising ETFs, mutual funds and stocks.

As expected, see chart below, after ruling out coincidence there were significant autocorrelations in the first 12 lags of weekly time series since Dec. 31 2004. The chart shows the density of p-values (a statistical measure for ruling out coincidence): broadly the blue area shows there were no statistically meaningful cases when past performance could actually enable sound future predictions. Interestingly, we found evidence of significant autocorrelations during some periods. 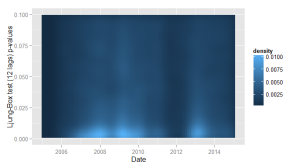 The white streaks in the chart above show higher densities of meaningful autocorrelation patterns in the securities under scrutiny thus indicating that using past prices may have lead to predictable results, obviously on a statistical basis. Using a logit model to capture four week ahead up-or-down expected directions and testing such model on a different time stretch from the one used to train it (respectively 2009-2014 and 2004-2008) the chart below reports the ‘hit-rates’ – i.e. the percentage of correctly predicted market directions – on all securities in the panel. Draw your conclusions, though many aren’t any different from a coin flip some might actually look interesting: check out ETFs and mutual funds before passing your stock order. 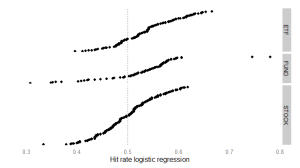