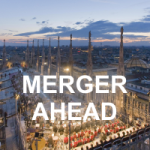 Non performing loans (NPLs) weigh on banks’ balance sheets and hinder new lending to firms and households. They do so via two different, though interconnected, channels: (1) provisioning weighs on margins and consequently on retained earnings and (2) by raising weights for capital requirements an NPL makes both the numerator and the denominator in the CET1 ratio rise. NPLs management absorbs a meaningful amount of resources (operating costs are a non trivial part of such an absorption) and specific organisational solutions may be adopted to address NPLs. Bigger banks have benefited from combining bad loans in a single specialized unit (sometimes called a bad bank), for example.

As yet, smaller Italian banks have been called for a consolidation, by regulators, of their balance sheets by M&As. The only game in town in Italy so far has been Banca Popolare di Milano (BPM) and Banco Popolare (BP) whose merger plan has been carefully scrutinized by the the regulators in Frankfurt which lately conveyed skepticism about the plan. Markets reacted putting downward pressure on stock prices on almost all European (and especially Italian) banks at large.

The plan, as has been disclosed so far, however does not show much evidence of synergistic effects (regarding bad debt as well). Regulators might as well have considered this too in their careful examination. BPM’s board of directors, in the to-be-created holding Newco (yes, because the resulting entity would leave the bride and the bachelor ample independence, at least during the first few years of their marriage), would consist of as many members as before (19 reportedly). BPM’s brand would continue to flag alone the bride last name for as many as three more years. There’s more lacking evidence of this in their merger plan, according to insider sources.

Where are the synergies?  Where’s the effect on operating costs? Where are the economies of scale? If considering the strategy to dispose of NPLs it seems they’re forecast to decrease from 23%, or so of BPM and BP’s combined balance sheets, to 21% in a three-year time span.

M&As in banking are delicate processes that need to be thoroughly planned before their announcement and must be carefully managed after their approval. Have both banks assessed all aspects involved? From the likely impact on capital ratios, to the desired and undesired consequences on financial, human, tangible and intangible resources, and so on. One should not forget that an initially hypothesized bank merger – this one was publicly announced – isn’t supposed to work out as figured out at the outset.

What are the goals of BPM and BP’s proposed bank merger? Scope and scale economies? Entry in new market segments that need a larger minimum size? Safeguard previously established market shares? Are regulators arrogant? It looks easy to put the blame on regulators. Are we sure this merger had the required (by both common sense and regulators) content or just the form.