“You feel it in your guts. You don’t need to have a look at the speedometer to know which speed you’re driving at!”. During a short interview with a credit analyst I think this is an awesome revelation containing the core of what overconfidence leads to: systematic biases, as we know them in behavioral finance.

Our findings are as as reported in the scatterplot below. Thus, we tend to underestimate and overestimate speed depending on the conditions we’re driving in. Though our little experiment doesn’t share much with the scientific approach one would need to touch such a sensitive issue as driving habits (no matter if you’re a reckless Italian driver or not), I think it sheds light again on how reliable our sensorial estimates can actually be. I wonder what this has to do with credit risk measurement. But perhaps I’m just a little too prejudiced – or biased. 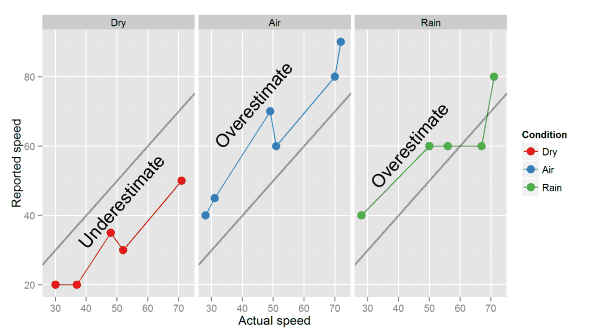 [1] Google B. Fildes, A. Leening & J. Corrigan at Monash University, for instance.