Posted on 9 December 2014 by Rodolfo Vanzini — No Comments ↓ 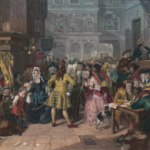 As the year draws to a dismal conclusion for the recession-hardened euro periphery, I want to update my recent seminar on valuations with this chart comparing PE multiples across a selection of stock markets.

Though stock indexes have been partying on new highs after the anxiety-driven correction of mid October, PE valuations don’t seem to be stretched, to a certain extent at least. By considering developed markets, an intelligent investor can realize that – the US with its deep and cap-prominent securities are mostly notable among the others – markets can’t be considered expensive. Moscow stock exchange, though in terms of multiples much cheaper than dev markets, discounts uncertainties regarding Russian state-backed gas and oil giants. 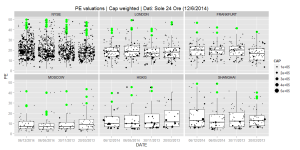